LED mining Light Strips: What Makes them so Special?

LED strip lights, also known as LED tape lights or LED ribbon lights, are known for their low-profile size and flexibility. Efficient LEDs sit on a 10mm wide circuit board, offered in 1meter to 10meters lengths. Flexible LED strip lights have many features that make them easy to use in a variety of situations:

Cut-to-size – Cutting LED strips is very simple thanks to the cut lines along the strips. At each cut point there is a black line with copper solder pads that sit on each side. The copper solder pads make it so each strip piece is addressable even after being cut. This makes it possible to connect LED strips together or connect the strip in a different area.

The density of an LED light strip means how many LEDs are in a set area. For LED flex strips, density is measured in ‘LEDs per Meter’. The Standard Density strip has 60 LEDs/M whereas the High-Density has 140 LEDs/M. A higher density strip equates to a higher quality, brighter light.

A Lumen is the measurement of brightness as perceived by the human eye. Thanks to incandescent lighting, most of us use watts to measure the brightness of a light. With LEDs, Lumens are the new standard to describe light output. Lumen output is one of the most important parts of choosing LED strip lights as it will determine the type of light you will receive.

CCT stands for Correlated Color Temperature which is the color temperature of light, measured in degrees Kelvin (K). The temperature rating of an LED strip directly affects what the light looks like. Look at the photos below for reference. Warm White is what we call 3000K which gives off an orange or yellowish appearance. As we increase degrees Kelvin the color changes from yellow to off white to natural white and then to bluish white which is known as Cool White

Mines can easily apply Strips to existing structures.
Due to the low energy consumption of Strip Lights, new installations require less cabling and switchgear, and can also be easily attached to existing infrastructures. Or Fitting a metal clip in every meter to the wall. No need for extra wiring and no fuss. 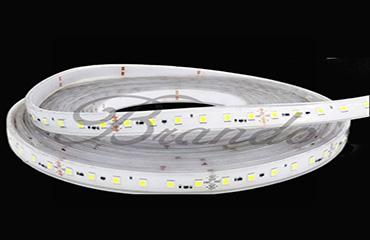